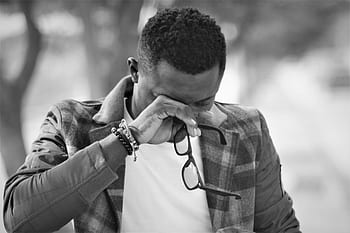 Unclegbolahan read a lot on how to avoid depression. He watched videos on “How to deal with depression”. He was a preacher on things you can do to prevent depression from stepping in and eating deep into you. He had his mental and emotional shield up against anything that could lead to depression.

As the saying goes ‘Nature always takes its due course’. One day, while Unclegbolahan was updating his Mental and Emotional shield, he didn’t know that his shield was down a little and depression seeped in. At first, the signs weren’t obvious, Unclegbolahan just felt himself disconnecting from the things that he had interest in (ball, writing, cruise), he got offended quickly, had annoying mood swings. Then suddenly the presence of friends was no longer appeasing, he just wanted to disconnect from everyone and everything.

ElPhemo who happens to be Unclegbolahan’s close friend took note of his sudden change in attitude. Elphemo invited Unclegbolahan to Ofadaboy, bought him Ofada Kingdom and a gourd of Palm wine. On His arrival, his stomach was grumbling at the sight of the delicacy. While he was eating, ElPhemo decided to ask him some questions and he opened up and spoke about what was bothering him. After pouring out his mind, he felt so free and light. He learnt to always have someone to open up to. He thanked ElPhemo for noticing and helping him out. He went home free and filled.

Depression is real, no matter how ‘strong’ you think you are, it still has its way of breaking your shield. Have someone you can open up to, someone trustworthy.

Guys, no hard guy when it comes to this. Nature doesn’t care.

The life of a Social Media Manager in 2 minutes

Music: FEM vs WAY TOO BIG, The Rivalry